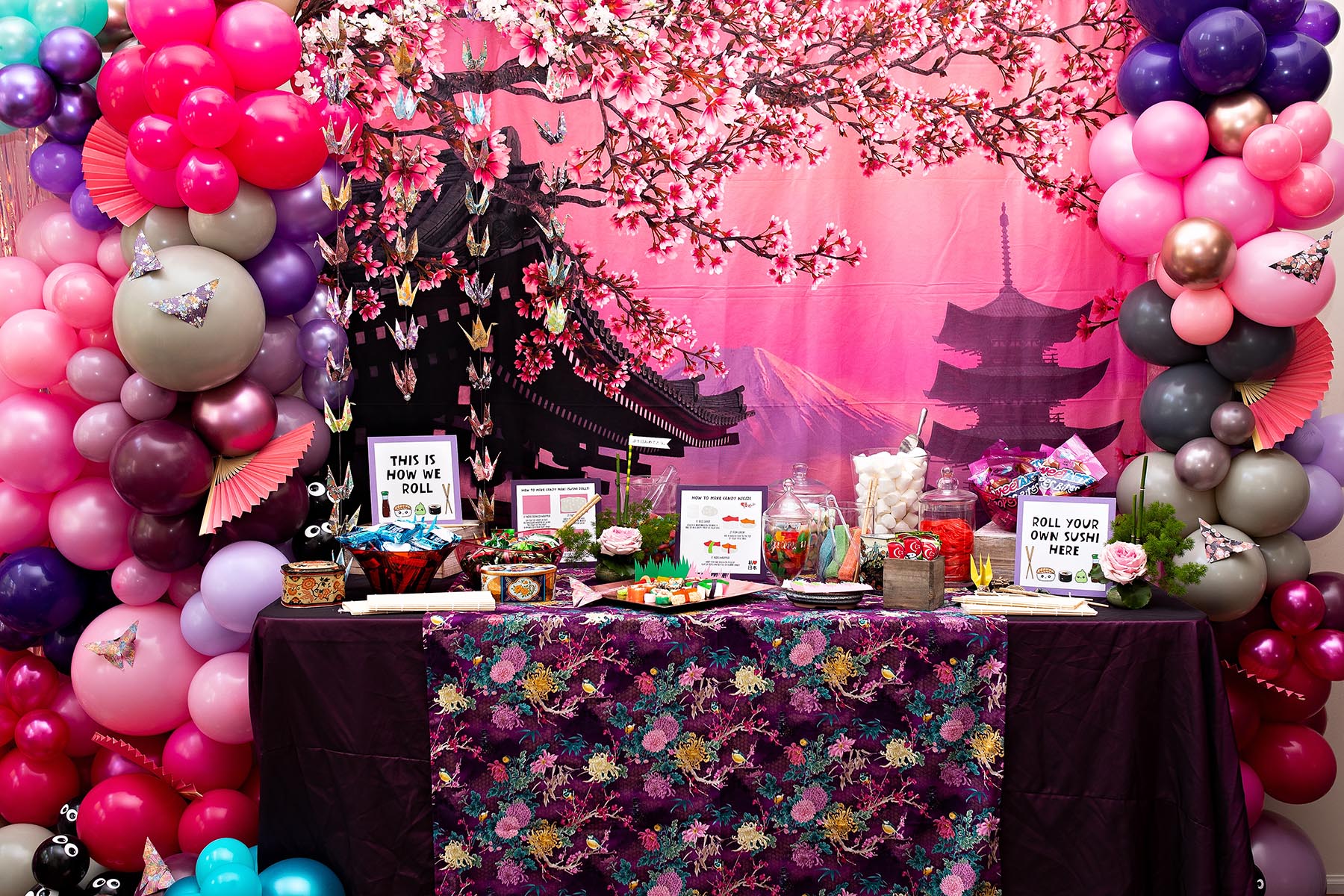 Largely because of my well-traveled sister, my daughters and I love all things Japanese. So much so that my girls wanted a birthday party featuring some of our favorite Japanese things which includes Studio Ghibli movies, origami, and Japanese food. We took this theme very seriously and made sure we honored and learned more about Japan as we were planning our event.

My girls really loved our Japanese-inspired party and enjoyed learning so many interesting facts about Japan and loved sharing what we learned with others. We hope our guests went home and watched some Studio Ghibli classics and learned more origami folds!

I made Soot Sprite cookies as favors for guests, and we served the most beautiful birthday cake created by Flour & Flowers by MK. It featured nods to Studio Ghibli’s Totoro and had some soot sprites as well as some hand-made sushi, origami paper crane, Sakura tree blossoms, and I even had her include some golden-mended cracks to represent Kintsugi which is the Japanese art of mending cracks in pottery with gold—the idea being that something broken can be mended to be more beautiful while highlighting the scars. We loved learning about this and many other Japanese traditions while hosting this party.

Making candy sushi was a messy but fun activity that the kids really enjoyed. There are many ways to make candy sushi maki and sashimi, but the main ingredients include rice crispy treats and different kinds of gummy candies. I designed some instruction cards to help explain the process and list all of the ingredients we used for ours (linked below with how to’s).

I also created origami kits for all the kids with instruction sheets and patterned and colorful origami papers. Many of the kids (and their parents) tried to make origami foxes, frogs, and other creatures!

All of the kids who attended got to pick favors from our favor bar which featured a lot of Japanese candies and treats (that we found at our local Japanese marketplace), inflatable samurai swords, assorted Studio Ghibli character, Pokémon, and Hello Kitty stickers, and take-home origami kits.

Everyone at the party got to learn 6 cool facts and 9 cool facts (nods to my daughter’s birthday ages (so 15 cool facts total)) about Japan which were featured in frames by the origami activity. Of these facts—my favorites were that Japan has over 68,000 residents over 100 years old and that Japan’s transit system is the most punctual in the world, averaging only 18 second delays! How impressive are those facts?!! Further proof that Japan is amazing!

The Décor:
Transforming spaces is one of my favorite things to do for parties. I designed a few balloon installations this time around after finding some great inspiration in a Japanese transit poster and a Sakura tree background fabric. I pulled colors from these items and designed (quite literally) around them. I found some great Asian-inspired fabrics and used those as table linens. My amazing sister folded hundreds of origami paper cranes which I hung from fishing line, and she also made origami butterflies that I attached directly to the balloons. I found some silk cherry-blossom branches that I added to the balloon displays as well. I included a photo-taking nook next to the candy sushi table and some Hello Kitty and Pikachu balloon clusters by the drink carts too.

I designed several ikebana-inspired floral designs all around the party space. I used pin frogs for most of them and tried to simplify my lines but as a seasoned wedding florist that was a big challenge for me! The arrangements looked very beautiful and brought a lot of color to the space.

Custom signage was everywhere. Food and favors were labeled and illustrated icons tied the theme together. I also used these icons on the invitations I designed so everything coordinated perfectly.

The Attire:
My birthday girls wanted to go as their favorite Studio Ghibli characters – my oldest went as Kiki from Kiki’s Delivery Service and I found most of her costume pieces (dress, cat, headband with giant bow) on Amazon. The other birthday girl, my middle daughter, wanted to be Satsuki from My Neighbor Totoro and my youngest daughter wanted to be Mei from the same movie. There were no costumes available online for these characters! I had to find similar patterns and sew them dresses instead and they turned out really cute. We will use all these outfits again for Halloween this year.

VENDORS:
Photography: Jennifer Kaye Photography
Cake: Flour & Flowers by MK
Recipes posted to: Baking Besties
Everything else by ME!